No more knitting. I am done with it. 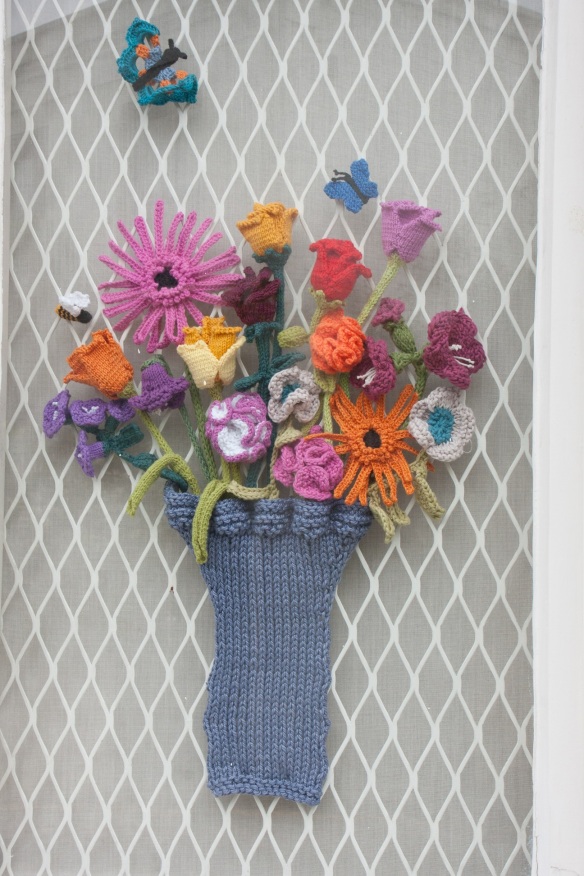 Ok, ok, there might me the occasional addition to my window display in the future, maybe a hungry caterpillar maybe another flower but for now I am done.

After the octopus flowers I was a bit unproductive and only managed to make a few more flowers and a few lovely mini beasts.

The improvised bee, as requested by my daughter:

I was looking for patterns and could not quite decide which one of these two I prefer. The small and simple knitted one from Spud and Chloe or the crochet one following a video tutorial by nadelspiel.

The crochet one is beautiful (just as butterflies are) and it was another good crochet experience for me.

From a linguists point of view it is really interesting how much easier it is for me to refresh my almost inexisting crochet skills in German rather than English. Even though I do not remember how to make the different stitches, hearing the familiar words Staebchen and feste Masche has a very comforting effect. And I guess, following a very clear video tutorial is helpful too.

I decided to arrange two of the mini beasts rather close to the flowers. 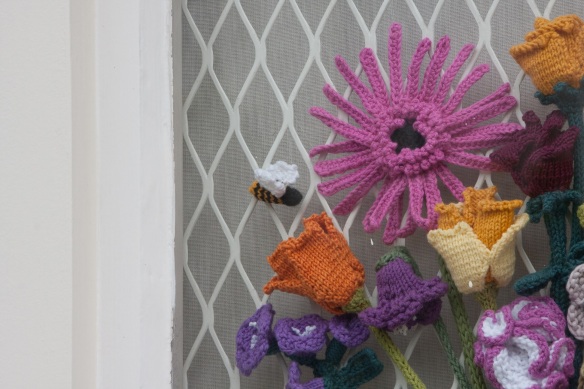 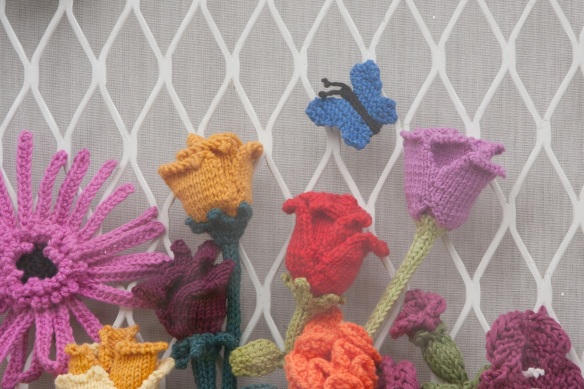 They might not be spotted from far away or from people just passing but they will be the fun little surprise for those who actually look at it properly. I really think having them there makes a lot of difference. The flowers are nice and people might even admire the knitting skills (if they can not knit at all) but discovering bee and butterfly will hopefully make them smile. Especially if they are on their way to the dentist next door 🙂

And just for those who think that I am always overcritical with myself: I think I should have planned the arrangement in advance rather than just putting them up when knitted up. They are not very well mixed colourwise nor specieswise. And as all tulips and roses are rather high up it is difficult to actually see the difference between them when standing on the pavement which is a bit of a shame because they are both made from very good and accurate patterns. But don’t worry, I am very pleased with the finished display. I just don’t know what to knit next… HELP!!!!