I know, I know, a little later than usual, but it is still Sunday.

It was World Books Day this week, so time to get dressed up as favourite book character. Which is quite clearly mistaken by some as favourite TV character. I saw a lot of Disney princesses and Superheros plus one Yoda.

But I was lucky.  I asked them: What’s your favourite book?

Child No 1: Room on the broom (We haven’t read it in ages but ok.  It is a good book, also costumewise)

We did a couple of times: -No your favourite BOOK. -Blue. (or “green” as clearly mum did not seem to be satisfied by blue)

I explained: – Look, for example P wants to be the witch from Room on the broom….

Technically, the witch costume is not exactly a scrap project. I had to buy just about everything. Well, the yellow bow (hiding behind the hair) and the ginger plait are made of scrap wool (see, I am still knitting). And we had the hat since ages. 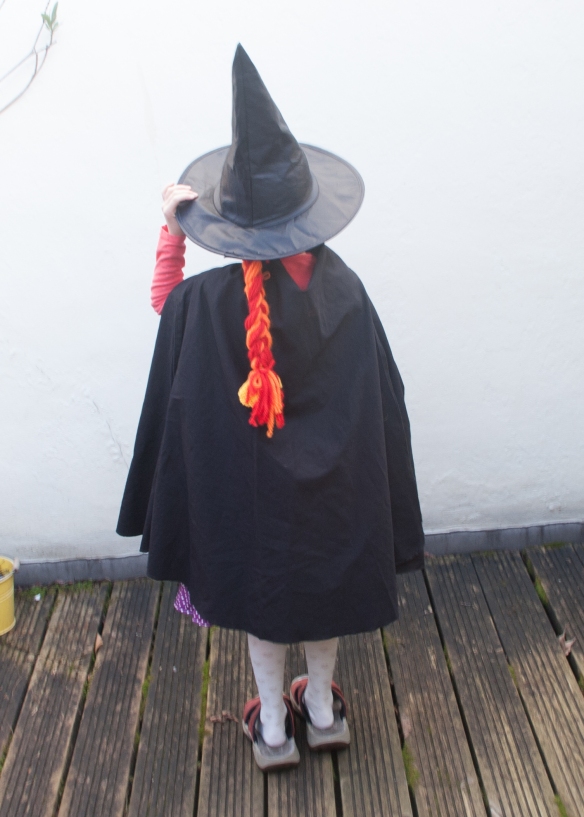 Obviously I could have made a simple purple skirt but I wanted to use the opportunity to practice piping as I will need it for the final garment in my Fashion Course.

The dragon however is entirely made of scrap.

I have used the left over from the carrot costume  and some other red and orange fabric scraps.

First of all I cut out some sets of red triangles plus some strong interfacing. I sewed them together and turned them inside out. I also made a stuffed grey horn similar to the one the dragon in the book has on his head.

For the main “body” I used a hood pattern and just elongated it at the back into a long tail. I pinned all the spikes and the horn on one side and stitched the two body parts together. I decided to line it with some dark red left over lining as it makes the whole costume just so much more sustainable.

As you can see, the horn does not quite stand up but the dragon was happy and so was I.

I did not want to make a full costume because… well it would have been far too much work really but also we needed something practical to be able to play in the nursery and its garden.

And in case if you were wondering why he carries a flag, obviously this is not a flag but a portable fire to breath out fire. Because this is what dragons do.

I am extremely pleased with the result of the whole costume making. The child inside misses the carnivals of my childhood I guess.

It has been very little work (apart from the skirt) with maximum outcome plus the children could help with some of  it. Obviously the skirt is too elaborate for a costume only but it was a good opportunity and I made it to be worn on many occasions.