There is this romantic image of the poor artist sitting in his freezing atelier, trying to hold his brush in his clammy hands to finish that magnificent painting before dying from pneumonia. Or the composer writing down the most wonderful music with the last tiny bit of his pencil before dying from hunger. Only the hope that one’s artistic genius will finally be recognised by coming generations keeps them going.

Other artists or artisans have a more pragmatic approach. They produce what the paying customer wants.

Now, I do not even dream of putting my name in the same sentence with Van Gogh or Mozart (Ok, I just found out that he wasn’t actually that poor, that is just a myth!!!!) but so far I am happy to say that I usually like what I make and that I am fully committed to it. So far, I never had to question the things that I made for others, be it a present or be it a custom order. I had been wondering in the past, if I would ever come in a situation where I would have to say: “No, I am not going to make this, it does not reflect any of my values” or “that is beneath me”. Or even worse, where I actually had to make something that would not reflect any of my values or that would be beneath me. Not because I would fall for a huge fee but because the safety or emotional well being of a close person would be threatened. Have you ever asked yourself where you would draw the line?

By now you might be wondering why I am going on about this problem, after all it is “only” Scrap Sunday. Well, you will see.

Last week, one of my friends took her children to a fun fair and for reasons that are not to be discussed here she convinced her daughter to have a go at the “catch a duck” game. The girl overcame her objections and caught a duck (obviously). She chose a toy set which included some plastic high heels and was incredibly pleased as she knew her mother would have never ever agreed on buying her high heels. She is that sort of humourless kill-joy who wants her children to play with a few stones and a jute bag to develop their creativity. (I believe I have shown you the results of their creativity on here already.)

So already the educational persuasion to catch a duck had backfired slightly. But things got worse.

At home the little girl realised that the shoes didn’t fit. A bit like Cinderella’s step sisters. Which is why the mother suggested to cut off those toes with a knife* (correction: the woman has clearly a brilliant sense of humour) . After this fabulous joke which was not really appreciated by the girl with the big toes, she promised to somehow fix the problem so the girl could enjoy her beautiful price.

And this is where finally my Scrap Sunday comes in. As I actually had to sacrifice some of my pink stripy jersey to make the little shoe big enough for the not so little girl. I removed the plastic top of the shoe and replaced it with a stripe of stretchy jersey which I crossed over to give a bit more security. 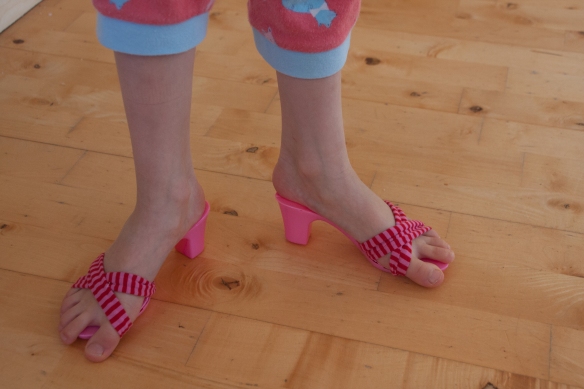 Toes are still big but get through. 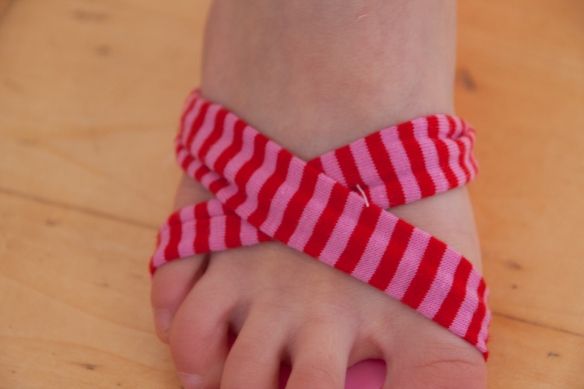 I never thought that I would actively be involved in saving toy high heels but considering that my friend had started the whole thing with the duck catching, it would have been too cruel to add the educational lesson of “see how these cheap plastic toys are of poor quality and have no value whatsoever, they even lead to negative feelings.”

And luckily after a day with the toy set and the fixed shoes the girl realised the latter all by herself :

* The German version by the Grimm brothers features two step sisters, who cut off their toe respectively heel in order to fit into the tiny glass shoe.