For this one we need to start way back, a couple of years ago ….

Once upon a time…. don’t worry, it won’t get that bad.

Anyway, years ago, I have made a small shoulder bag for my daughter’s best friend. As I quite liked it I made a few more for other friends.

I never actually saw the little girl using her bag. It was always her mother carrying it with this very insisting and slightly scary glare in her eyes… until I made her her own. And one for my equally glaring daughter.

My friend seemed happy. But not only did she continue carrying her daughter’s bag around, she also kept telling me “casually”  that her other daughter really liked those bags and that the poor child was interested in placing an order and paying real money for it.

Around the same time she gave me her daughters old rain coat with the words that maybe I could use it for one of my sewing projects. After years and years of heavy hint dropping I finally gave in and made my first proper upcycling project. A bag made out of an old rain coat. Apologies for not taking a picture of the original rain coat but here is the bag: 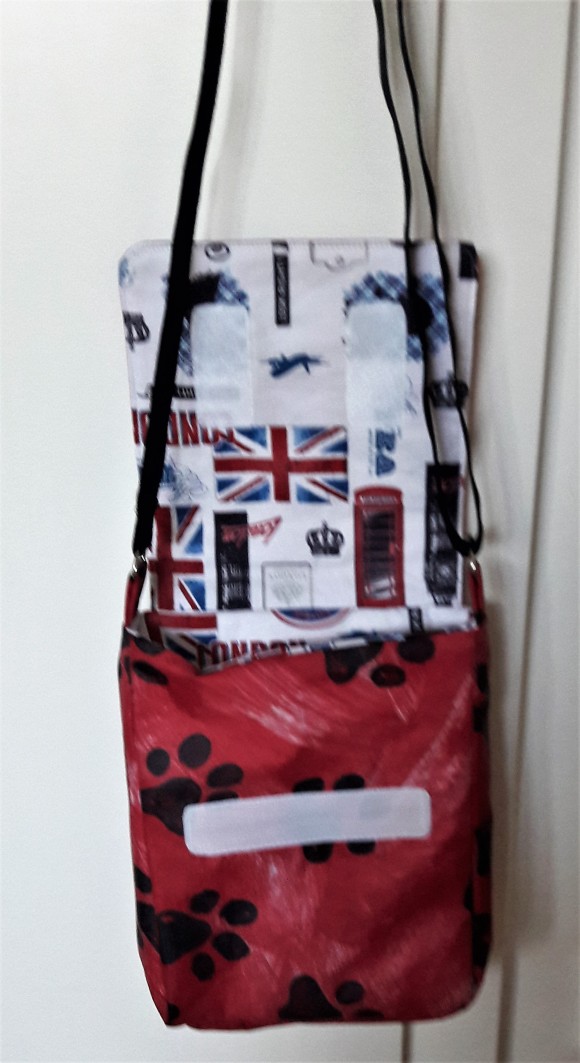 I chose a London themed lining as it was supposed to be a bag for a young lady so it needed to be cool rather than the usual childish stuff. I am extremely pleased with the result, think it really looks cool. I am not sure what the girl thinks. Probably she never got it, instead there will be a blond woman running through London carrying three bags and glaring at other people who dare carrying nice bags. If you ever see her, don’t look her straight in the eyes, slowly move backwards and keep your bag tightly.

Oh, and just for the record, I also made another one for my niece who asked for  one for her birthday a few weeks ago.

I suppose my niece liked it… Thinking of it, I haven’t handed it over myself, maybe she never got it and there is a glaring lady with 4 bags running through London…