A couple of months ago I knitted a hat with ear flaps (using from my stash), thinking it would probably be for my son. But it became too big and I wasn’t sure about the colours. So I left it on the big pile of unfinished projects on my desk.

Then, a couple of weeks ago, my sister told me how pleased her children were with their shirts and that the little one had already demanded “another dinosaur from auntie Ursula” as my sister had put his shirt  into the washing machine, without any reason or notice obviously. 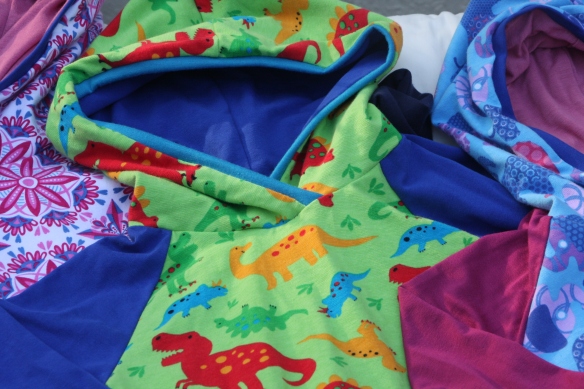 I thought I should make him something out of the left overs of this dinosaur fabric. But what? Definitely not a hairband. 🙂 So I left the idea in the big pile of unfinished ideas in my head.

And then, the pressure of Scrap Sunday was on and I suddenly remembered the hat and its colours and how similar they were to the colours of the dinosaur fabric. How about lining the hat with dinosaurs? (A bit of a waste as the yarn is the softest merino wool ever, even approved by Mr. sensitive skin.)

I searched for the hat and remembered that I was not quite sure about the colour combo. I really like contrasting colours but somehow it did not work here.

I simply can’t give my nephew a present I am unsure about myself. So I ordered new yarn for a new hat and stared in the meantime at the old one. I realised it was only the red crochet edge which didn’t work for me. But I didn’t have anymore of the green yarn left. (Stupidly I did not take a picture of the hat at this stage).

When the box with the new yarn finally arrived, I tried the new colours and there it was, a slightly darker and bluer green. The perfect edge for this hat, much better than the initial red one. I added a pompom with the contrasting orange and red from the stripes and lined the hat with the dinosaur fabric. And now it is really lovely  and I am so pleased I did not just rip the whole hat. 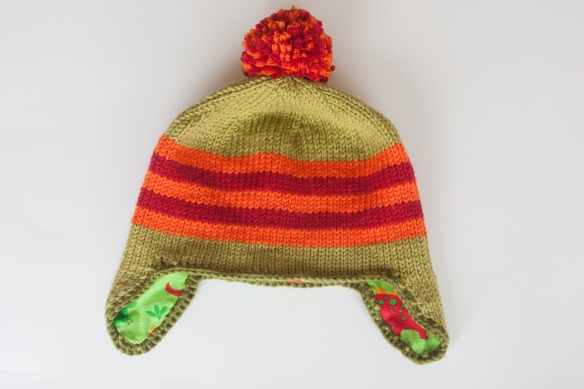 I just hope my nephew doesn’t think that the dinosaurs should be seen and wants to wear it inside out….. Maybe it is not a good idea to use nice fabric as a lining after all 🙂 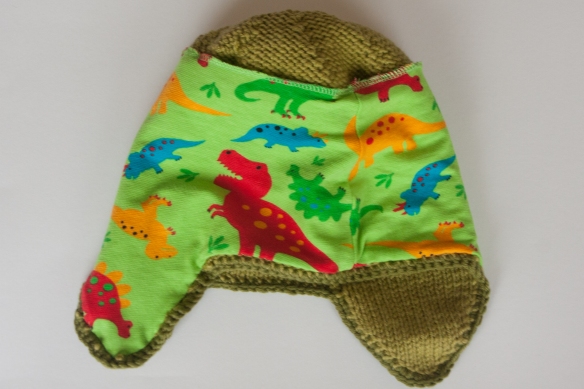