I have this lovely, pretty and witty friend whose son decided a couple of months ago that he is not wearing trousers anymore. Ever. Under no circumstances. He wants to wear leggings just like his big sister. As these feelings seemed to be very strong, my lovely friend went and bought leggings, sets of two to make sure that she wouldn’t get into trouble with the big one if the small one had suddenly nicer ones. As it turns out, pink or grey leggings are ok, black leggings aren’t, leggings with butterflies are ok, leggings with teeny tiny pleats at the hem aren’t. It is all rather complicated.

Suddenly it seemed like a good idea to give this pattydoo leggings pattern a go. Up until then I found it slightly pointless to make leggings myself. I did consider to make some out of a thicker material like sweat for the colder season as I know another person who things that trousers are not an option for girls whereas I think that at some point it gets too cold for leggings only. Even in England. I did adapt a fair bit to the English way of not dressing properly when it gets wet and cold but not all the way! If you put your feet under my table, you will wear trousers AND tights when you go outside in winter. And boots. And a hat… But ok, I live here since 8ish years, so I don’t have strong feelings about scarfs or gloves. But definitely trousers! Even if you are a girl! Ok, I am getting side-tracked. So back to leggings.

I still had a rather big piece of the dragon and knight fabric from the lovely shirt I made for the little boy and thought it would look rather interesting as leggings. Certainly something you don’t see very often. I was only a bit worried he might combine the two, which I think, would look a bit silly. 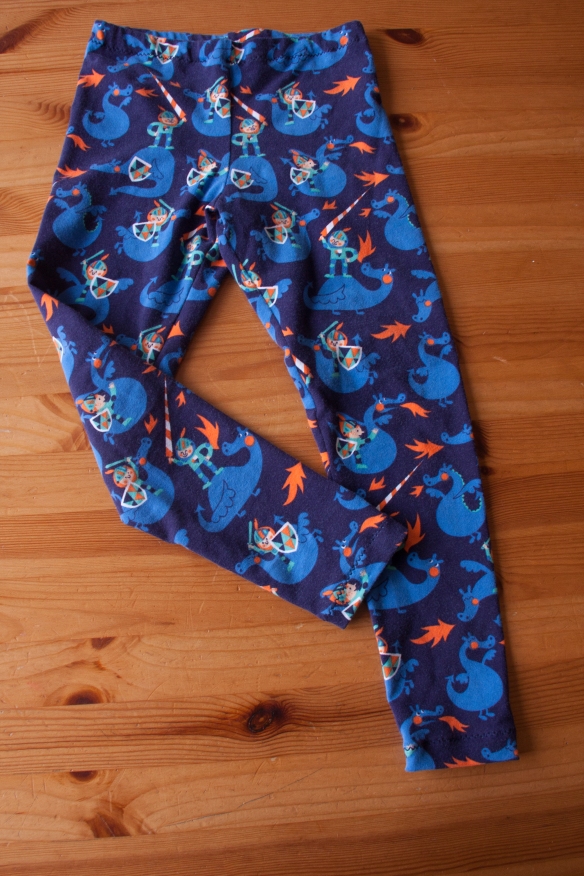 Rather cool, isn’t it.

Now, how about a picture of the boy wearing these? When wearing leggings he generally looks a bit like a 70s rock star. (I quote a friend here, sadly I did not come up with it myself, but it is true).

Well, as it turns out, there is no need for me to worry that he might go for the silly combination of dragon shirt and dragon leggings as obviously he doesn’t wear them at all. So no picture of them in action, sorry.

I also made a pair for my daughter. And they look rather cool too. At least that is what I think.

You might find them not tight enough for leggings. Well that was done on purpose. She is very skinny so I would have had to adapt the pattern but I decided to just go for the right size lengthwise as I thought the fabric might just last longer if it is not constantly stretched over the knees. And as it is a relatively expensive fabric, I would prefer if they last longer as the shop bought leggings.

So, I will definitely make a few more leggings in the future but I guess, it will be limited on the warmer versions which you can hardly find in shops. In that case, I guess it is worth the money.