I guess, I will most likely loose one of my dear readers when I post pictures of this extremely well researched and authentic knight costume. He is not only a historian but also a Lord of the Rings expert. In my defense…. well, there is no defense, so lets just get it over with. Just a few words before we have a look at the pictures.

So, as you might remember, the little Mr No Thank You has since a long time requested a knight costume made from the beautiful light grey fabric with white dots he had once chosen in the shop for this purpose. So I thought his 4th birthday might be a good occasion to finally follow up on my promise. In addition he also got a very elaborate wooden shield, made and painted by daddy and big sister. That shield is actually really cool and makes my costume look even more ridiculous. (During the birthday party two mothers were admiring the “helmet” and thought the fabrics would make a great skirt!)

But, should I tell you a secret? And please never ever tell the brave and fierce knight. But thanks to my pregnancy hormones I find my little knight extremely cute in his costume. I guess, not quite the look I should have been aiming for 🙂 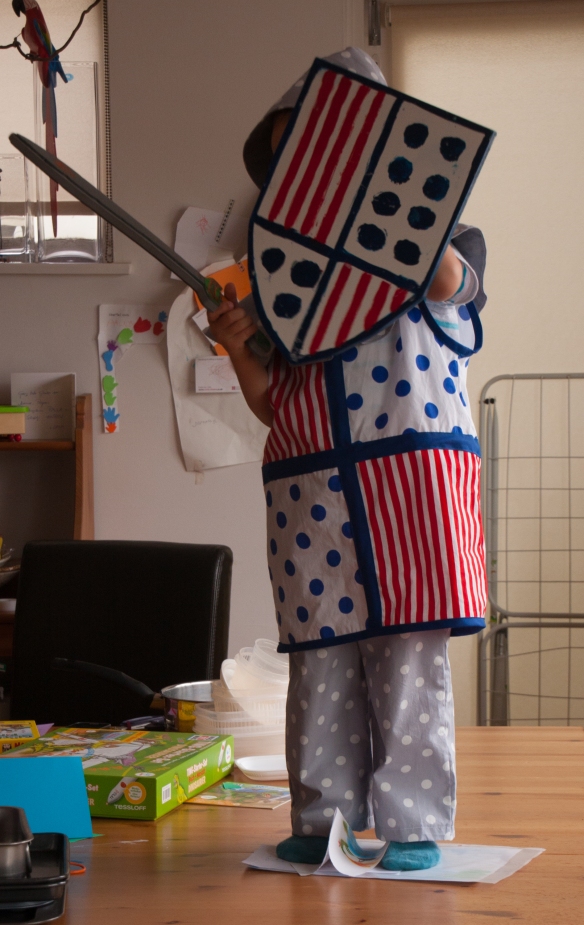 So, lets have a look at each item: 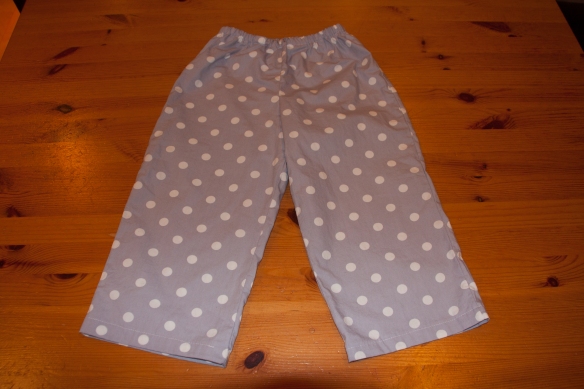 I have used the requested fabric for these and made them from the bottom part of a dungaree pattern from farbenmix and just added a few centimetres on top to make a casing for an elastic band.
I have used this pattern a few times, sadly I do not have pictures of the first version, they were quite 70s.

I thought the red and white stripy fabric would be very suitable and somehow I was convinced the blue dots would go well with it. At least this way the costume doubles up as a clown’s costume. How very efficient. 🙂

They are both left over fabrics from a play pen cover I had made a few years ago. (so this is the Scrap part of this post, just to justify why I am using a Scrap Sunday post for this project)

The blue lines are made from shop bought bias binding. My initial idea was to use a black one but I wanted to match the shield which has blue lines.

I made this without pattern, just using rough measurements and I made a split neckline for easy access. And for easy sewing I left the split without the bias binding. 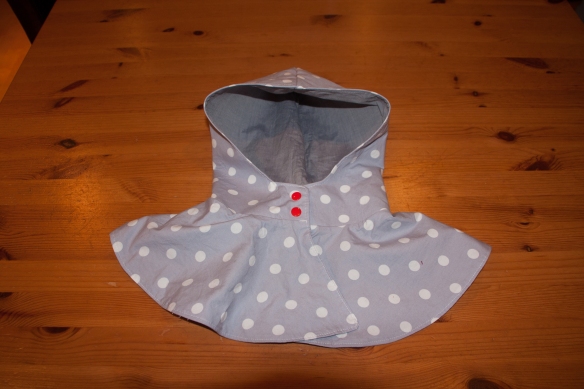 I have used a hood pattern from the usual pattydoo shirt and just added a circle at the bottom: I measured the length of the bottom line and took this as the circumference of the inner circle and added a good 15cm for the outer circle (which is too much for a little knight – it does look perfect on my shoulders though).

I enhanced the hood part with a rather strong interfacing. If I had to make this helmet again, I would probably alter the pattern a bit and make it a bit less pointy at the interfacing makes it stick out a bit.

I lined the whole thing with a nice grey fabric, I once found in a remnant box in a shop in Shepherds Bush.

As mentioned before this combination would apparently be lovely for a skirt. At least according to some mothers at the birthday party. Which was about the first time I doubted the fierceness of the costume 🙂

I promise I will do my very best to stop seeing him as mummy’s little boy and start making him less babyish costumes. After all, he just turned 4  🙂