When I posted my to do list a couple of weeks ago, I might have mentioned two costumes for a party where my children were asked to turn up as Tiger Lily and pirate.

I wasn’t too keen to be honest. I guess it is just my natural dislike of doing something that wasn’t my own choice but someone else telling me what to do (Believe it or not, a part of me (qualified teacher) doesn’t want my children to do their homework properly 🙂 )

Anyway, I didn’t want to spend too much time on the costumes plus I actually like the simple ones that leave enough room for imagination much more than those sets that make every little girl look like a certain princess and every little boy as a certain super hero. Considering that I have made quite a few costumes in the last few years, I guess I should at some point put them all together in one post put for now let me just remind you of the Room on the Broom witch and her dragon. I think the latter is one of my favourites.

But back to the Peter Pan party.

For the pirate, I decided that an eye patch (shop bought and plastic, was better than the one I had made a few posts ago), a triangular pirate head scarf made of two scrap pieces of a shark themed cotton and a belt together with a stripy T-Shirt and some shortish leggings would be enough.

I was once again convinced that the red and white stripes  used for the knight costume would make an ideal pirate belt and I decided to do a double sided belt as I did suddenly feel a bit guilty about my negative approach, I guess any scarf wrapped around the belly would have been just fine.

To save on the precious stripes I chose the blue dots for the other side – also to give the pirate a choice, depending on the mood and the rest of the outfit.

I then put in some kam snaps as, once again, they seemed perfect for this occasion.

I decided on two rows of snaps to make sure that the belt can be worn for longer, or by different children. I guess, that was a bit unrealistic, but if there is already a choice of designs then surely there should also be a choice of sizes to make this the ultimate pirate belt.

Unfortunately I can’t really show you of the belt worn by a pirate, first of all he refused to wear a suitable T-shirt and put it over a jumper which did not really make him look like a pirate at all and secondly I do not have any pictures of the worn outfit which would pass my “no faces online” policy.

For the Tiger Lily, I took a left over light yellow cotton and cut two rectangles (length: shoulder to knee-ish, width: shoulders plus a few cm)

On one of the shorter sides, I created the shoulders, leaving the middle of the edge open for the neck, then I cut out a neckline. With the serger I just went around all the edges and made a rolled hem  and then I closed the middle of the longer edges, creating armholes but leaving it open at the bottom to make sure that the “dress” has enough room to move around and climb on pirate ships.

As I had known that the Tiger Lily was particularly unhappy about her forced costume, I wanted to make up for it with fancy trims and so I had, already on my last shopping trip, bought some leather fringe and put it on the hem and also across the chest, rather than just cutting a fringe into the hem which would have been my initial idea.

And for the headdress I had chosen a pretty blue trimming, closed it with a piece of elastic to make sure it would fit and just sew on a red feather. 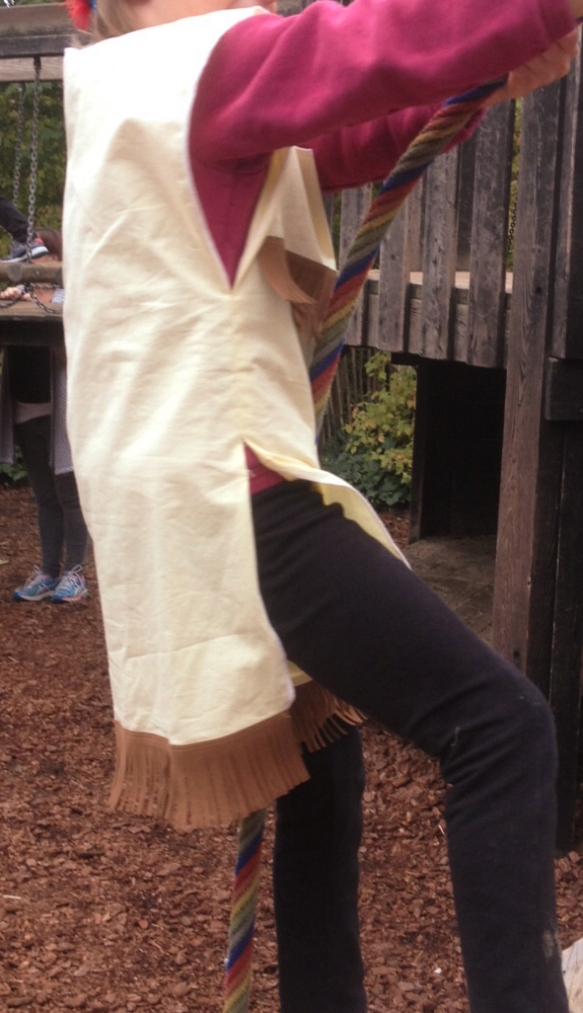 I am afraid that is the best picture I can offer you but at least you can see that it is really a perfect costume to play and climb.

So just like the simplicity of the costumes should inspire the children’s imagination, I am hoping that the lack of quality of the pictures will inspire the imagination of my dear readers 🙂