As you know, I am most productive when I have my children around. Still not sure why. But I can definitely get a lot done when they play next to me. At least as long as they don’t fight or try to burn the house down.

So actually I was really busy during the first half of the Easter break. I am still working on a big yoga bag order but I did take some breaks (when I had done my daily task) and made a few things for my children.

The least exciting one would be this shirt, using the left overs from my niece’s shirt in combination with a stripy jersey that was once in a “surprise bag” from Michas Stoffecke and a cheap grey jersey from Shepherds Bush, initially intended as trial material on my search for the perfect breastfeeding top (which I will ideally make while still breastfeeding)

I used my usual pattydoo pattern but I am now normally hiding the seam at the neck which looks much more professional:

and I am trying out a new stitch for the hem. I used the twin needle in the past and was really pleased with the look but that seam actually fell apart in some of the shirts which is not exactly ideal.

I am not sure if I have even posted a picture of the initial girl version, made in February already: 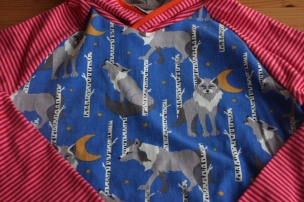 The second most exciting item was a dress, using a klimperklein pattern and a pink flowery sweat that I have since a while: 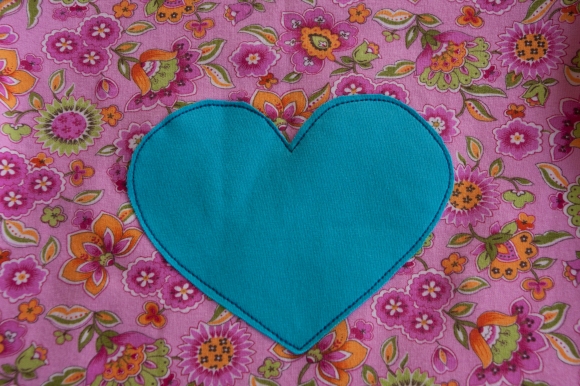 I find this dress really cool. I think the sporty raglan pattern and the colour of the heart go very well in combination with the rather girly fabric.

So two lovely projects for two lovely children but the loveliest (project, not child – they are all exactly the same lovely) of all is still to be shown:

A reversible jacket with a pointy hood. Just right for the “in between seasons” season.

I didn’t have enough of the brown car sweat left for the whole jacket so I made blue sleeves. Then I thought that the inner jacket should similarly have different sleeves but I am not entirely sure about it. It looks a bit odd. Maybe I should have done the hood in the orange stripes as well. Plus the teal of the star fabric doesn’t go with the blue of the sleeves but I was really keen on using it. It is a lovely fabric, almost a bit of a waste to be used as lining only. I can’t wait until the outside gets vomit on it so I’ll have an excuse to turn it. 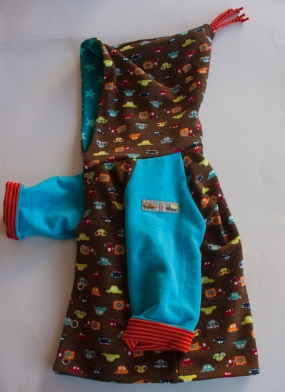 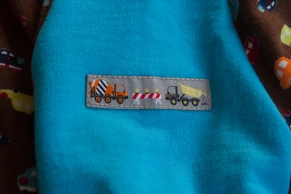 I have used another klimperklein pattern, this time from her book. I was so excited to get that book. When it finally arrived I was slightly disappointed at first. I guess, after all the great e-books I expected much more pictures and variations of each pattern. Which is silly and totally my fault. A book simply can’t provide the same amount of  step by step pictures and 20 variations of each item. And actually the author Pauline Dohmen must have thought the same as she is now even publishing amazing tutorials on her blog for the most crucial questions. Like how to properly sew and turn a reversible jacket…. or a lined coat :). The tutorial landed in my inbox just about a week after I had struggled with the coat! What a bad timing. But I will now know forever how to do this 🙂

Just a few pictures of my little jacket, a proper tutorial  can be found on the klimperklein blog.

First, the two jackets sewn together, except at the sleeves. The two jackets are NOT to be put inside each other. (And obviously, there is a gap at one of the side seams of the inner jacket so they can later be turned inside out): 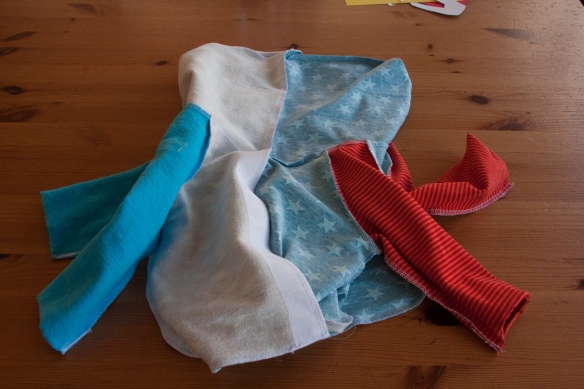 Now, join the sleeves, being careful not to twist them. Pauline Dohmen refers to it as kissing elephant trunks. What a useful image! 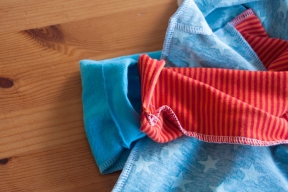 Finally, the jackets fully sewn together – except the turning gap at the inner jacket, you can see it on the left side. 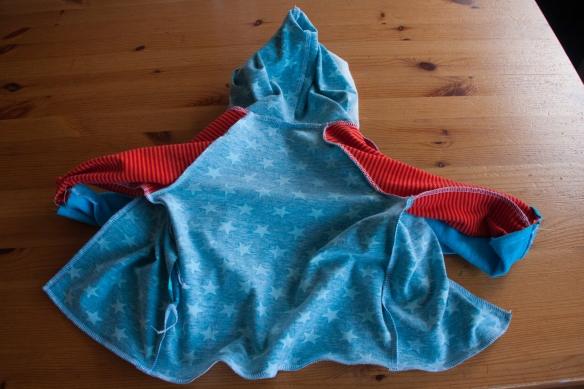 I love that little jacket so much, I have never been happier to live in England where it will be just the right weather for an “in between season” jacket for another 6 months 🙂

1 thought on “Quick catch up”