As I said last week, I have been busy with quite a few bags lately.

This time, I will show you two very similar bags, one is a Christmas present for last year (so it needed to be a bit more apologetic than usual) and a smaller version as a birthday present (just in time) for my niece.

For the adult version I followed roughly a pattern from Lisa Lam’s The Bag Making Bible (not a bad book, lots of things in it, but it does lack a bit of consistency and pictures where you can actually see what is happening. Maybe not quite a Bible but a good start)

For the outside I have used waterproof coated cotton which I have once again bought at Dotsnstripes.

For the big bag’s inside I have used red and orange cotton, plus one patterned cotton hiding behind a zip 🙂

I made a laptop flap thingy on one side and three different pocket types on the other side.

The book suggests to use Twist Locks for the main flap but I was slightly too frightened to make holes in something that I have made myself. Thought I will leave that for next time. My initial plan was to just use a band of velcro to close it. I did change my mind halfway through though and bought some kind of button release buckle on ebay which meant that I needed a rather long and awkward looking strap to reach from flap edge to bottom bag edge. Not too great so I guess, next time I will try those square twist locks and make holes to fit them 🙂 or at least decide before cutting out and make a longer flap.

For my niece I made a smaller version as there is no point in dragging around a bag that is half the size of you.

Instead of a flap I decided to put in a concealed top edge zip. I was a little bit unsure which fabric to choose to conceal that zip. The waterproof outer? Might be tricky to sew neatly, will be bulky  and might be odd to fix to the bag.

The plain cotton inner? Not waterproof, slightly flimsy (in comparison) and most importantly boring.

Difficult choice so I went for a third option: a strong cotton with yet another pattern. And as I was already adding patterns, I thought I might as well use another fabric for that inner top edge and made this in another one of the waterproof coated cottons. 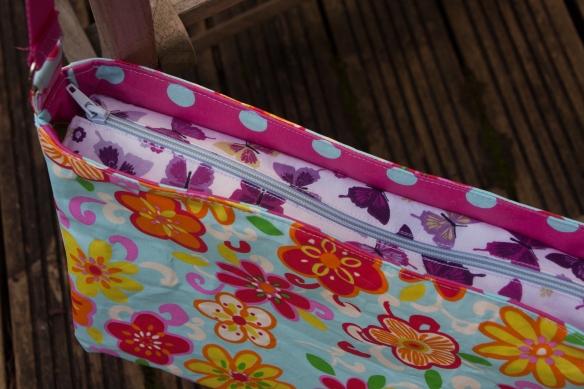 Inside, I added three pockets in total, one with zip and the patterned cotton (same as for the zip) on the inside of the pocket.

I honestly love using a pretty fabric secretly hiding behind a zip. It makes it so more special, no?

I am very pleased with both results, they look amazing and I can’t wait to finally make one for myself – after all this is why I initially bought that fabric in the first place a few months ago 🙂

It is just hard to say which one I prefer… which one would you choose?