In one of my many Glueckspakete (Glueck meaning luck and happiness at the same time) by Lillestoff I had found the perfect fabric for pyjamas for the young man who only owns one piece that actually fits and has no holes in it). Except that it was about 5cm too short. So, I angrily through it into a corner but then I thought, no, there needs to be a way around it. I meant to make a onesie and after considering a second fabric for the lower legs or some kind of belt-like stripe of contrasting fabric around the waist, I decided to go for a contrasting yoke and once it was finished, I really liked the look of it. I will definitely make more of these.

I hadn’t planned it but I immediately thought, this was probably what Captain Kirk was wearing at night.

and I was already planning a funny blog post about it. Only to realise that actually the Original crew was wearing plain coloured uniforms, the yoke was in the Next Generation. So Jean-Luc Picard, even better! But no! He had been wearing red. Who had the mustard uniform then? Right. Data. And Worf. Not great to fantasize about. So lets just forget about the whole thing and talk about something else.

Oh yes, I meant to show you another piece made of a Gluecksfabric. Again something, I would never have chosen in the shop. Dark blue with a little bit of grey and silver. But then I took the opportunity to make a grown-up hoody in grown-up colours. I actually went and bought some grey sweat for the sleeves as there wasn’t enough of the main fabric. Imagine, I stood in the shop and compared forty-eight shades of grey (with a second of considering mustard or cinnamon – I guess I was hungry at the time)! And voila a totally grown-up hoody in grown-up subtle colours. No sillyness to be seen. Honestly. 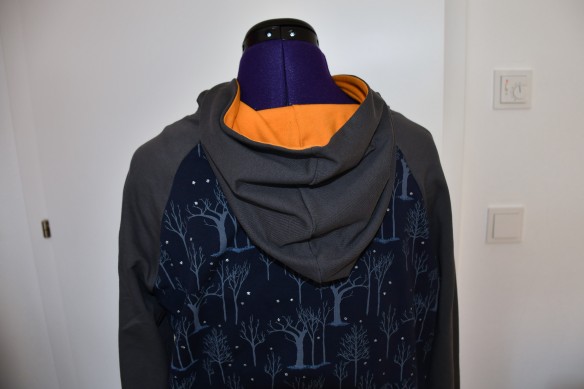 What? Oh, just leave me alone! I did try my best.