Then there is also the possibility that my sister-in-law found them so horrific that she pretended they never arrived whilst secretly burning them. But she is the sort of polite person who would have forced her daughter to wear them first to be able to send me a picture of her wearing them before actually burning them.

Which leaves us with the possibility that someone has actually stolen them out of the box. Seems unlikely, I know, considering that there were actually much prettier things in the box, like the two lovely jumpers and the wrapped birthday present containing the amazing dress and the cute skirt plus some necessities for the three-year old (fancy tape and stickers). However, around the same time, we had ordered stilts for our training-to-be-a-circus-artist-child. And the package arrived but with the foot rests missing!!!!! Obviously there is person out there with serious hight issues, stealing tiny leggings (and probably wearing them) and tall-making-devices! So if you see someone jumping around on wooden blocks and wearing these leggings, please call the police. 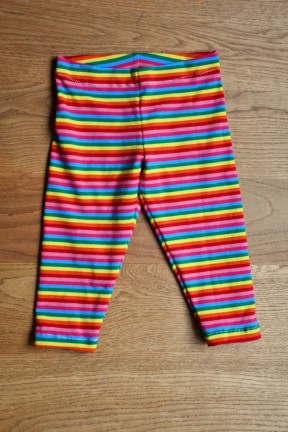 pattern: leggings Lilly by pattydoo, fabrics from my stash

To prove my point (not sure which one), these are the things that have not been stolen: 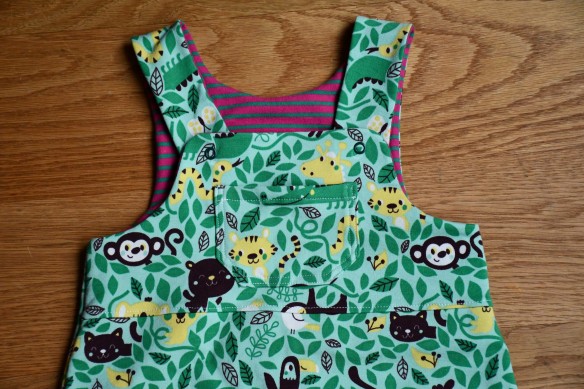 … and a cute skirt

And may I just draw your attention to the hem of the skirt: 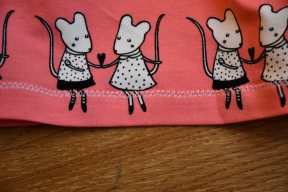 made with my brand new sewing machine. In one go. Would be really quick to make if I had the courage to actually go over the slowest possible speed.

It is a really fancy machine. Lots of buttons and a shiny display. And a working light bulb that hasn’t fallen out yet. A real change to the old one. And you don’t need a foot pedal anymore. You just press a button to make it work. Which apparently my foot doesn’t know yet. I have observed it standing up at 45 degree without a pedal in sight on several sewing occasions.