I think I have already mentioned the Lillestoff Glueckspakete – 1kg of surprise fabrics for 15 to 18 Euro. You don’t know what you’re getting, so the wait is quite exciting, almost like Christmas. Plus, it is often a challenge because you will get fabrics you would never have chosen. Sometimes, those are the most interesting makes with surprising results.

When I discovered a huge piece of ice hockey fabric in my last boys packet, I wasn’t happy. My sons are not interested in ice hockey. I am not sure if they even know it exists. And I do not seem to know any other boys who are interested in ice hockey. Clearly, I had to broaden my horizon.  And all of a sudden, I actually remembered three female friends who are totally into ice hockey. Or rather in one particular player. I  think they have even officially founded a fan club. Don’t get me wrong, I am sure he used to be an excellent ice hockey player and he is certainly a nice guy, I just personally don’t get this kind of fan obsession. They have pictures of him everywhere, know everything about him, make him birthday presents and cakes and write him letters. I suppose in case of the two younger ones it is still ok, a kind of sweet and innocent admiration for a father figure. Well, if you happen to have an ice hockey playing father, I guess. But when it comes to the oldest one of the three! I mean, she even knows where he lives and frequently hangs out there! Is that still appropriate for a woman in her extremely late 30s?

But back to my project. Making three tops out of that one piece of fabric was a bit of a challenge. So I decided to start with the shirts for the two younger ones. Simply because I like them more than the older one. She seems to think she is the boss of the three and wants to make all decisions. As if she was their mother! (Please don’t tell her, I don’t want to offend her).

I used the Pia pattern by pattydoo, a loose fitting sleeveless shirt with drop shoulders. I intended to make two similar ones, just with different colours for neckline and armholes. 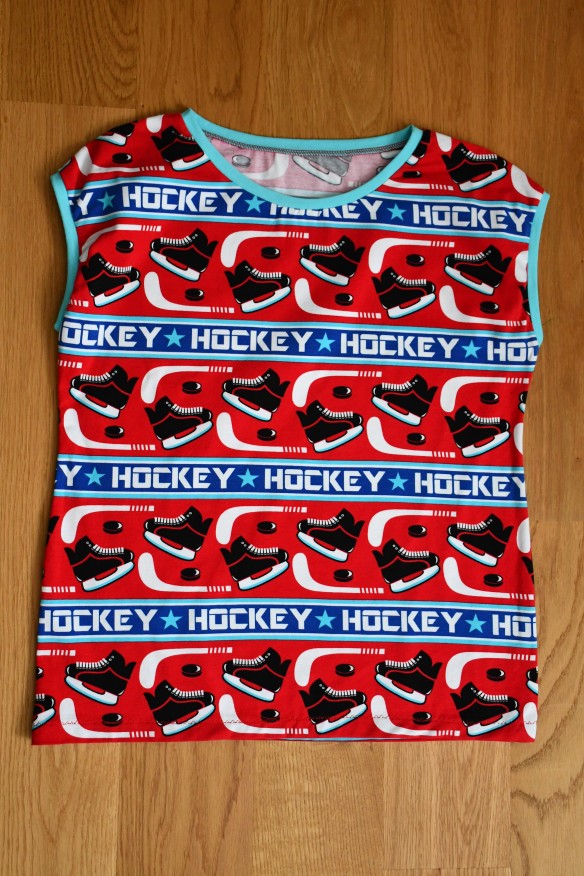 I struggled to get them both out of one length of the  fabric  – it was about one or two inches too short and I stupidly sacrificed the smaller sized top. Oh the anger when I realised it would be too short – especially for someone who is still growing ! I had to save it somehow so I opened the hem again and added a (waist) band. I do like the look of it. More than the oversized style of the first one. 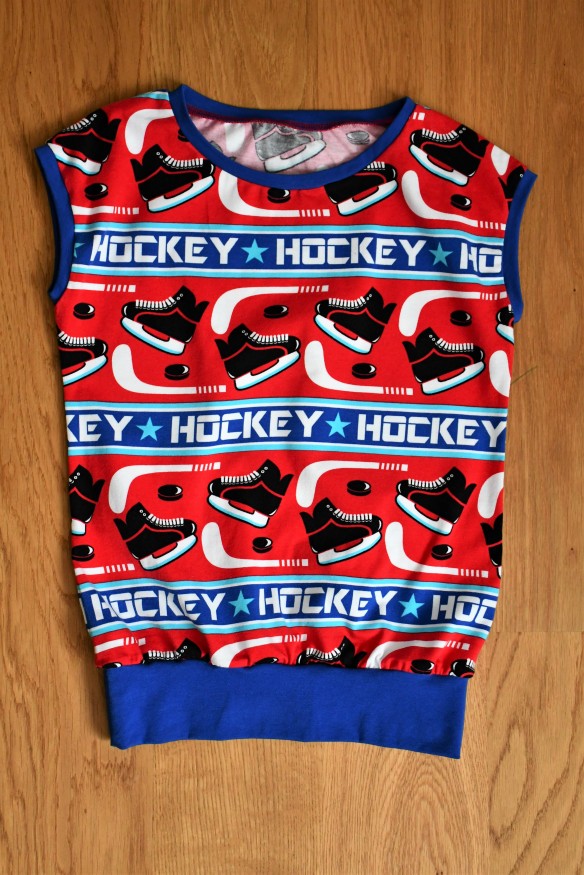 After cutting the two smaller shirts I only had a very narrow and long stripe of the fabric left. Big piece but too narrow to make at least one side for the third shirt. I really felt the need to make one for the third crazy fan, too. I didn’t want to provoke her. I told you, she can be a bit bossy at times so who knows how she would have treated the two other girls in her jealousy. So, I decided to go crazy, too and to make just one half of the front with the hockey fabric and combine it with some stripes I found in my stash.

To enhance the centre front seam, I overlocked it on the right side of the fabric with a narrow stitch and black thread (for a cool look). The result didn’t look like I had expected it. There was no link between the two sides. The obvious idea would have been a heart application or a pocket with the hockey fabric on the stripy side. But I think such an element on the chest “has to” be on the left side. Unfortunately I had put the hockey fabric on the left side. So, I ended up with a star at hip level, overlapping the side seam.

Overall I am very pleased with the outcome. A huge piece of fabric that had seemed to be a total waste has found its purpose. Even if it is just for a laugh.