If you don’t fancy reading an epic and boring post please scroll to the truly amazing pictures at the end. They are worth it. Really.

As we have established in the last post, 2016 is officially a not so good year. And I guess since then there have been a few incidents that did not quite help.

Personally, I would also say, it has not been the best year of my life but certainly the one with the most challenges. And there is actually a good thing about challenges, too. They make you grow. And I am determined not to let the bad things win. Instead of moaning, being scared and living in split societies, lets pull ourselves together and think what we can do to reunite and work as a team. (I am talking to you, my friends in the land of brexit and in Trumpistan, well and in all European countries I guess) Look around you and do something to unite people instead of separating them. Founding a knitting group is definitely a good thing. I guess for the male readers of the blog I would recommend playing football or starting to talk to strangers in the pub. But I suppose you are doing that already.

I also want to use this post to show you the greatest thing I have ever made. In my whole life. I love it and I want to wrap myself into it. I am really proud of it. Since about three months I want to write an appropriate post about it. But as it deserves a hair cut, a professional fotographer and probably a studio with proper lighting (yes it does deserve all of that), I had to delay it. I still haven’t found a photographer (mainly because I wasn’t looking) but I really want to share it with you to show you that 2016 wasn’t actually just bad. So, those few pictures taken on an early September morning will do. I trust my skilled followers to imagine the thing in its whole glory.

But let me start from the beginning. Ever since I have children, I wanted one of these and moving back to Austria, into a bigger flat, I thought it would be finally time to get it: a play carpet with roads on it. A trip to a Swedish furniture shop made me realise that the ones you can purchase don’t feel nice materialwise and are certainly not as cool as the one we had as children. Which was basically a huge piece of blue fabric, possibly a thin denim, with simple stitched lines to mark the roads. In all those years I hadn’t realised that my mum had made it. So I decided to make one myself. I had seen street fabrics so I was initially thinking of buying one of these, finish the edges and voila.  Certainly I did not intend to invest hours of work to mark the roads by hand stitching them.

And that might be the moment when I got carried away a little bit. I thought I had finally found my perfect niche product where I could earn my living. Not too much material involved and certainly quick to sew. I had the vision of a take away play mat, maybe with a little holder with handles, similar to a picknick blanket. Or how about attaching the handles directly to the mat? In which case I would need a second layer of fabric to have a nice back. And as my husband pointed out, one or even two layers of fabric would not be a nice texture. So I would need to add some padding. So material costs were already on the rise, work load still under control. I guess you would still find some people who would buy it for a reasonable price (from my point of view)

Sure those fabrics with street prints on them are not the cheapest and to be honest, I liked the simplicity of our own blanket as it leaves so much room for your own imagination. I was torn. And did some research. And found some wonderful and crazy examples, like the one Schnabelina made. For very obvious reasons she calls it play mat “deluxe”. Or this one by ollewetter. I really liked the idea of adding a pocket on the outside. Obviously if you have a take away play mat then you’ll need to take a few cars with you. So fabric costs were going up again but still under control as left overs could be finished off. Time involved was on the rise as well. Still an affordable result though I thought. At this point I was already mentally designing a website for my play mat shop. Only mentally, I don’t know how to design a website.

Those two examples have impressed me a lot. Schnabelinas tunnel and also ollewetters petrol station are so cool. Again, I had to rewrite my business plan. Using up left overs would make it possibly less expensive fabricwise but time was exploding. Hmm. I guess this was the moment when my project left the “not exactly fortune generating but still reasonable business ” area and became a “slightly over the top birthday present for someone who will not actually play that much with it”.

Anyway, here it is.

From the very first draft to a full scale pattern (as a modern designer you will obviously need a computer and a cup of coffee. And a very long ruler. You guys won’t have any of these, it is just for professionals, you see) 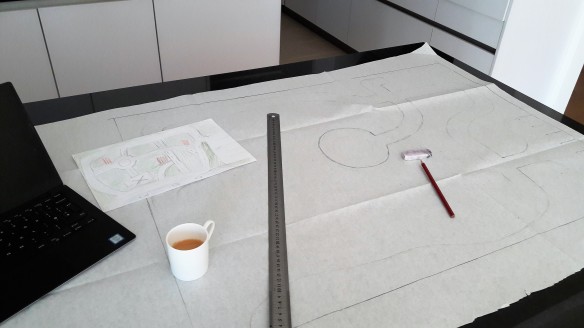 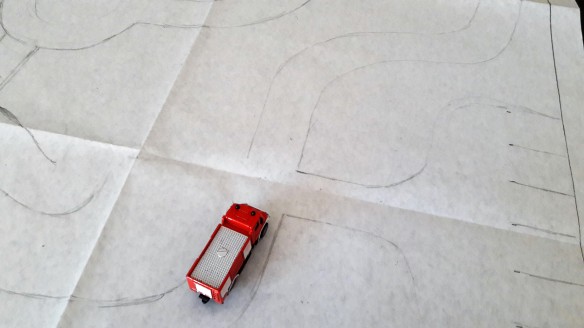 I kept the original pattern and cut out shapes on transparent paper to be able to check fabric later. 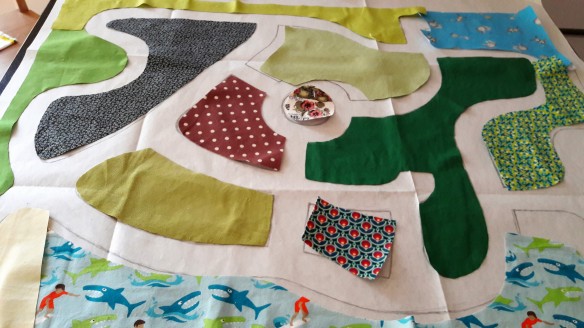 For the back I used a dotted cotton. I think it is a nice and colourful look and it also hides the cleverly placed poppers which keep the folded mat in bag size. 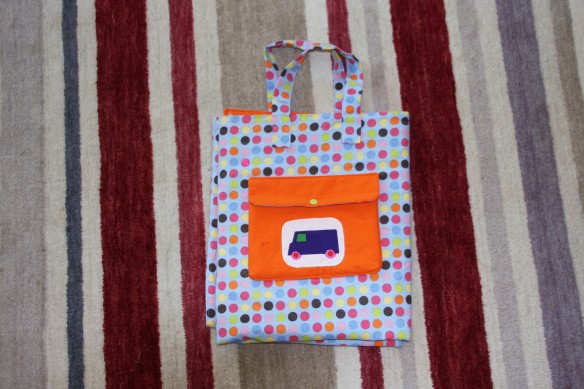 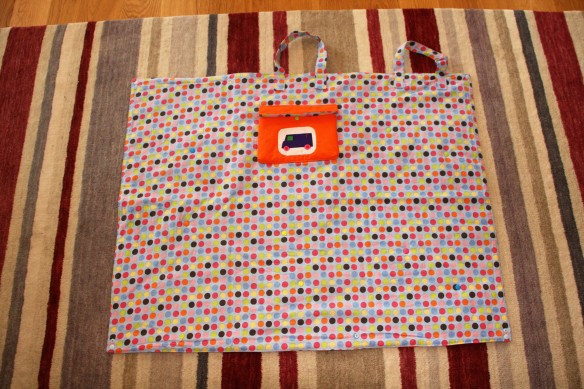 The whole thing is padded with a thick layer of… well…. padding. It has a really nice and soft texture now.

For the front I used a grey cotton as background and then different fabrics, mainly greens cut out and appliqued. Depending on the used fabric, you could imagine a zoo in one corner and a, rather dangerous, seaside on the bottom edge with a little bit of sandy beach in the corner. The roundabout features a flower bed. Or a flower shop if you want. But definitely something with flowers. 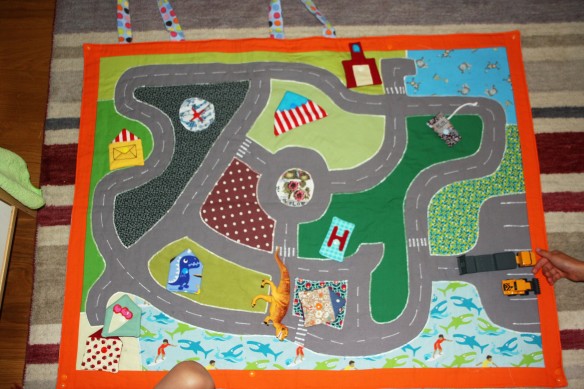 I made a variety of buildings, some have a more obvious use than others who are supposed to give the player more room for imagination.  Apparently the intended fire station at the top in the previous picture can also be used as church (by every annoying and not seeing the truth person I asked)

I just needed my own petrol station: 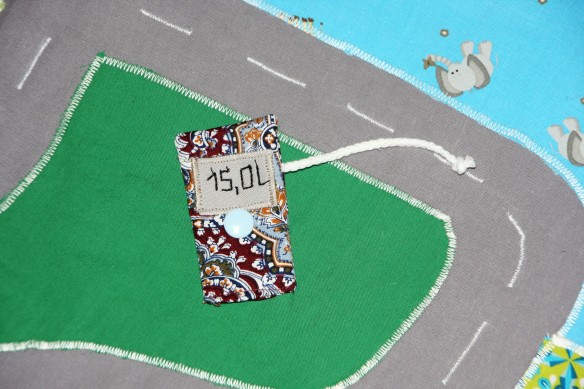 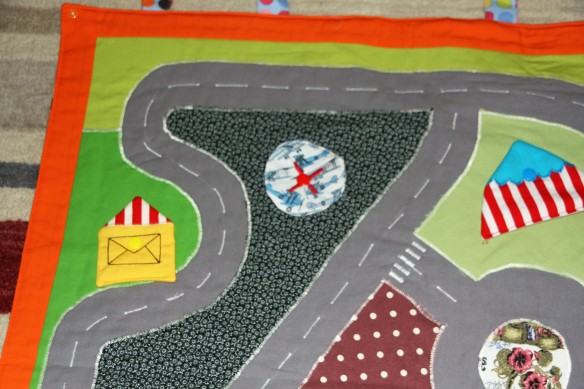 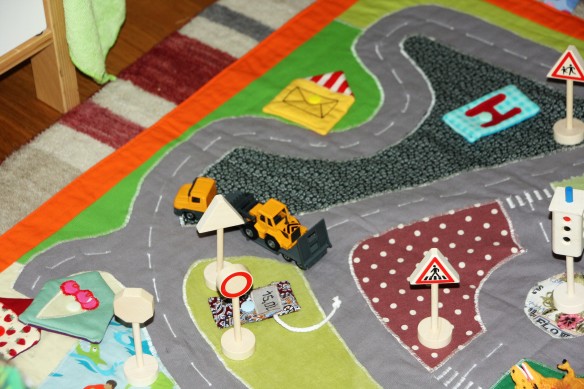 The very attentive readers amongst you (not too many I know) may have noticed that the helicopter landing spot in the dark green has been replaced by the hospital in the second picture. How is this possible? Another, similar play mat? No. This is my favourite, incredibly clever feature: all those buildings are actually removeable. There are one type of popper sides all over the play mat and the builings have the other type. So you can clip them on wherever you want (obviously not really wherever you want, only on the poppers, silly)

And just a few more pictures, because I am so impressed and pleased with myself 🙂 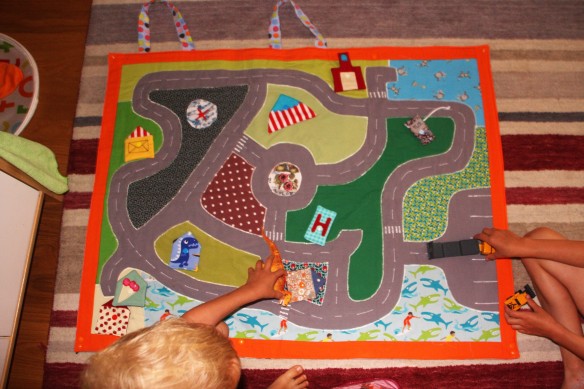 Here, you can also admire the zig zagging around all edges and for the street markings and zebra crossing. Well and some dinosaurs who invaded the mat. 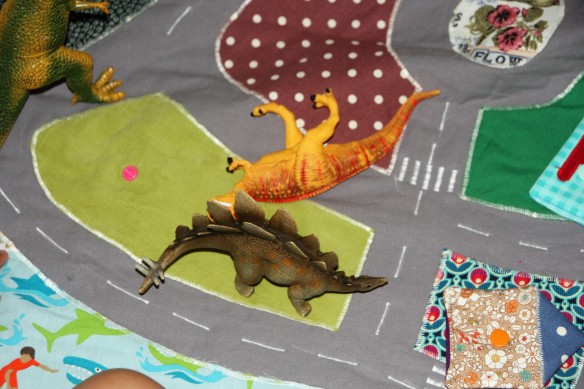 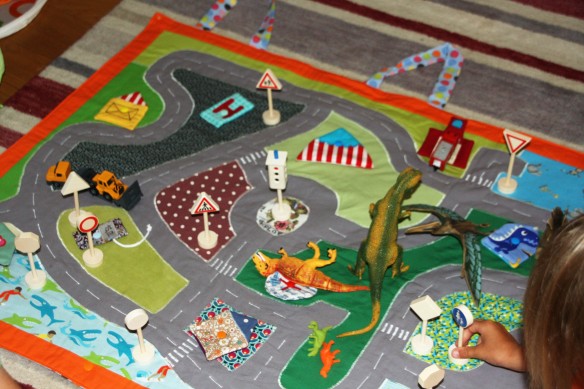 As I was not the only extremely pleased person, my daughter requested a car play mat as well. I thought it is silly to have two of them in the house and convinced her that a enchanted forest, fairytale scenery would be much better. Now I have to make one of these. Except that I don’t know how. But hey, another challenge which will make me grow (see how I cleverly came back to the start of this post?)

Have a good end of the year and I wish you all a happy and healthy 2017 with lots of new friends.