Today will be all about sewing. My son is always jealous of my daughters colourful dresses and skirts and I have to admit I have been sewing and knitting much more things for her than for him.

So I will be making him dungarees out of the most colourful corduroy I could find in the fabric shops in Shepherds Bush. It was not easy, there is really not much for boys.

I am using a pattern from farbenmix . They have beautiful things there, patterns from independent designers with lots of support on their website, ribbons,…

I have recently started a sewing class on Thursdays where you sew your own project and the teacher will support you with whatever you need. I have already prepared a bit at home to get as much as possible done in the class.
And hopefully my son will be happy with it. Oh and guess what, my daughter has already announced that she wants dungerees as well… just to be fair 🙂

This request reminded me a bit of the scene where the narrator meets the little Prince for the first time and gets asked: “Draw me a sheep”.

I did not really take it for serious since it was actually my 7 year old nephew reacting to his slightly annoying aunt trying to be funny by offering to make him the same flowery hairband than for his little sister.

Later my sister told me that he had once asked her to make  him a “beaver river” which she did. So, I realised that rather than just laughing at an idea, I should just think about how to make it come true. I guess that is one of the things that we can really learn from children and I am now in fact really glad my nephew has asked me for a knitted mountain chain for his birthday! And here it is: 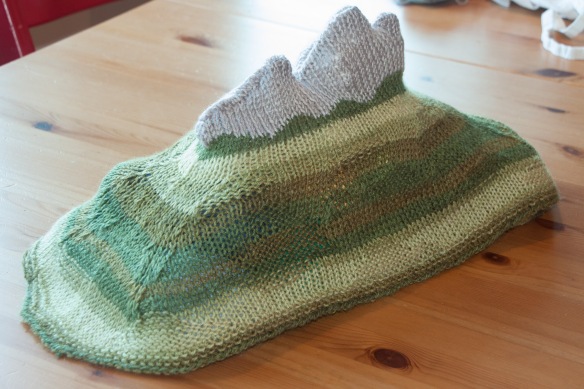 It actually reminds me of a particular view from back home. I guess my subconscious was guiding my needles when I tried to shape the top section. I wonder if anybody will recognise it or maybe be reminded of any other particular view?

Here is the link to my ravelry project

I had been looking for a green yarn with a few different shades and finally found the Stylecraft Vision DK. I was expecting shorter sections of the different colours to get patches of different greens rather than the stripes that I actually got. I have also randomly purled a few stitches in between all the knitted ones to get a more uneven structure, representing the different structures of nature – grass, bushes, trees,…

After talking to my sister and my nephew about his play experience with the beaver river, I have decided to keep it really simple so he can play with it as freely as possible and use his obviously very rich imagination to create by himself whatever is missing.

Initially I wanted to even only knit a plain rectangle but I realised that would get bulky and not “fall” nicely if he puts it over a frame or stuffing. So I started to knit in the round, with 4 stitch markers as indication for a  more or less rectangular base. I did then some decreases around the stitch markers, not always in the same place and also changing the direction of the line by alternating k2tog and ssk.

The colour change from green to grey is done over three or four rounds, I then split the whole thing in two half’s and worked to more or less mirrored sides which I sew together in the end to make sure I’ll get sharp  summits.

For the picture I actually stapled a few balls of yarn and a few tissues for the top section. I guess a frame built from lego will work fine too. 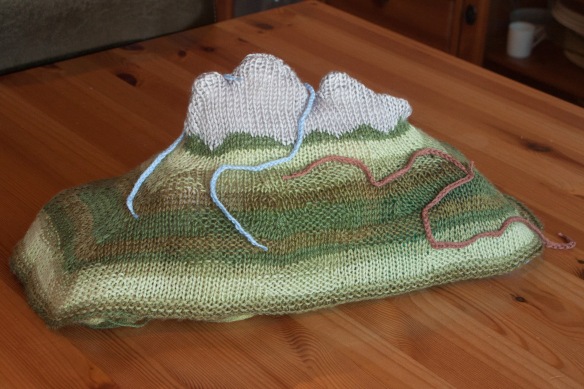 although they do look a bit like giant worms, don’t they.

I am really curious to see or rather hear how this mountain chain will get used and what other little items my nephew will add to play with it. In any case, it has definitely been a fun project!