It has been a busy week and I have been able to finish a few things on my list, for example I managed to finish the cardigan for my auntie…. well, except for the buttons. I did buy some but I am not sure if I like them. I bought them without taking the cardigan which is never a clever idea. We will see. Oh, and baby blanket no 1 is only missing  3 squares. And lots of sewing I guess.

I also made a beautiful knight’s costume but that really deserves its own post. I am not sure if it is a good sign that some mothers attending the best birthday party ever (Really. No fights. No interfering needed.) thought that the fabric of the helmet would make a beautiful skirt.

You’ll soon be able to form your own opinion, as – much to my surprise – the knight was actually wearing the costume for about 5 min! On the same day he got it! Who would have thought?! Certainly not I.

And I have not only finished some of the yoga bags, I have even already sent them on their long journey to Austrian country side.

I have finished two of the waterproof ones, I just looove these fabrics and I so want to make a bag for myself out of the brown one:

On my last trip back home I have also finally realised that the local taste is more subtle, not quite as loud, colour mixing and childish as mine (It only took me about 38 years to realise) so I attempted to create some more tone in tone, maybe slightly more sporty, even manly ones  rather than cute flowery playful ones. Oh, well, I did try but see for yourself.

For the next one I used a very special fabric that I have in my treasure box since a few years. It is a precious, very expensive left over Marimekko fabric and I was wondering for years what I could use this rather thin stripe for. It was just enough for two very special yoga bags and I do hope that they will find a lovely and caring new owner 🙂

One of them is on it’s way to Yogastueble in Austria:

And the other one is actually in my etsy shop:

I have also made one “traditional” one, which is on its way to Austria.

It is really interesting, sometimes when I choose the fabrics for a new bag, I might not be too keen on the combination initially (when I try to suit somebody else’s taste rather than making something for me), finding it maybe too “boring”, like the green one, which is the most tone in tone bag I have ever produced. But then, when it is finished, I really like it. The green one is now almost my favourite (but please don’t tell anybody). I say almost because if I had to chose between the Marimekko one and the green one, then I would still go for the Marimekko I guess 🙂

But enough of the yoga bags for now. Tomorrow we will have to attend a Peter Pan themed birthday party where we are asked to come as a pirate and a Tiger Lily. I had to google the latter. And the pirate told me already that he does not want to be a scruffy pirate. Not sure what a smartly dressed pirate looks like but in any case I do not want to spend too much time on costumes for a one off event. I will keep you updated though. 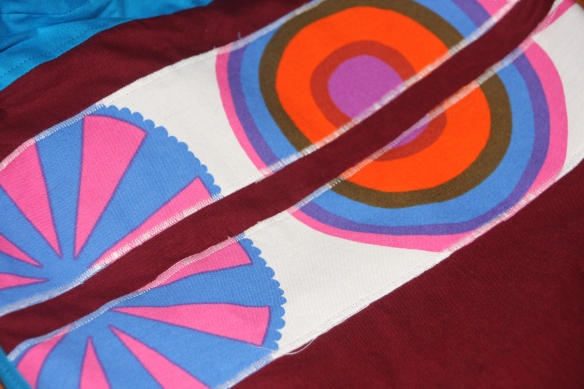 I am currently very busy with a big new sewing project but I don’t want to tell until it is finished. Well, until Step 1 of a new adventure is finished.

It includes the use up of a very loved and precious fabric so it is perfect for Scrap Sunday – except that I can not talk about it.

All I can say is that I have this piece of fabric since a few years. I walked past a Marimekko shop and discovered those beautiful finnish designs. I walked straight in to buy some fabric. I had cushion covers for the children’s bedroom planned since a while. When I discovered the price (over £40 a meter, but very good quality also), I had to reduce the planned amount of at least 500m to twice 60cm 🙂

I was very thrifty when cutting out and made two almost normal sized cushion covers and two smaller, rectangular ones. Which left me with two long stripes of roughly 15cm width each. I was always wondering what I could possibly make out of this tiny piece, especially as my favourite one (big round shapes) doesn’t even show the complete pattern anymore, it is cut right through the circles. But I could certainly not throw it away.

Anyway, now, years after, I finally got the perfect opportunity to use one of them as stripy appliques on something I can’t talk about. I will manage to squeeze out two one of a kind special edition examples of my new project and it looks a-ma-zing.

I promise I will show you more in a couple of days. Really 🙂

Oh and don’t forget the coupon code UPDATE11 if you want to get 15% off in my shop until Friday only.