Since quite a while now I wanted to knit a moebius scarf. A moebius band seams so simple, just take a strip of paper, give it a half twist and glue the ends together. Doesn’t sound very interesting, isn’t it. But I had an eyeopening moment which I would like to share.

So here is my first trial, just a simple stripy infinity scarf. I have used a provisional cast on and grafted the (twisted) ends together.

I am very pleased with it, I love the colours, especially when wrapped around my neck. 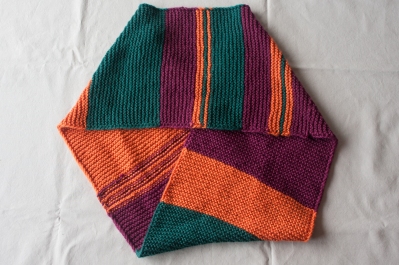 Nice scarf but I still didn’t quite get all the fuss about the moebius and how to cast on when knit in the round. I stupidly thought that just twisting your cast on row would end up in a moebius but when I decided to knit one in the round too, I realised immediately that twisting the first round would get me nowhere.

The cast on row is actually in the center, I added a few rows in red in the end to make the moebius twist more visible.

Making this little piece really opened my eyes, I finally understood (a bit) how the moebius band works, there is no inside or outside, no front, no back. It is really an amazing structure. And the cast on is incredibly clever too. I will definitely knit another moebius soon, maybe following a pattern for something really pretty. Well, at least I will put it on my never ending list.

Maybe all scientists should knit a moebius once in their life as it would really help them to understand the structure. I am now picturing my old chemistry professors sitting there and knitting… 🙂