You are probably wondering why you haven’t heard from me in a while. Or probably you aren’t. In any case, I just came here to tell you that I am not able to post for another while. Because I am in internetfree land. Well internetdifficult land. I am currently in the middle of a 4 weeks sewing detox programme in the Black Forest in Germany. I meant to use this time to post about all those lovely things I made during a little sewing frenzy leading up to this detox stay. But uploading those pictures would take weeks. So I will wait and post them when back to civilisation.

However, as a good blogger, I do have a little Scrap project for you. I came here with a box of wool and needles. No one said anything about knitting detox. On the contrary, I thought it would be lovely to go back to knitting if I have to leave my sewing machine behind.

After a day or two here I realised that I often have nothing to carry keys, phone (to go to the only spot with reception, surprisingly near the Reception) and money so after a couple of days with a big cotton tote bag (initially my knitting bag), I knitted a small bag, using the scraps that I had brought for the children and their knitting fork)

Sorry for the star dust – it seemed appropriate for the idyllic Black Forest. And I am frankly just very proud of my recent discoveries on my phone. Well the little one showed me.

With my real knitting project, I did not get very far yet, due to a lack of time:

This is my project: a jumper for myself by Atelier Alfa.

This is how far I got in the last two weeks:

See you in a couple of weeks!

Small tissue issue means there will be a big tissue issue post too, I just don’t get much time for crafting or blogging these days. It is all about decluttering and phone calls. Speaking of decluttering (I know, I am already getting off the track in line 3), I realised that the best way to declutter is to transform clutter into gifts for dear friends. Imagine, you are giving someone a pot and this person will then always remember you when she or he uses that pot to cook a delicious meal for family and friends (it is a big pot). Or when you give away some precious yarn instead of a knitted item. That way people can remember you not only when they are wearing or using whatever you knitted for them (which would be very time consuming for you) but you are also giving them the pleasure of creating something with their own hands. Of course I wouldn’t recommend giving someone hand dyed silk/merino if that person needs … say… two years for a tiny knitted square.

Anyway, back to Scrap Sunday and the tissue issue.

In my last knitting class, when we were celebrating the most outstanding projects people had finished over the course of a couple of weeks, months or even years, I realised that whilst I had helped many people to fall in love with knitting, I seem to personally have moved on. I rarely find the time to knit and focus much more on the sewing recently (or not so recently). In fact I am slightly jealous of my own students who have progressed so well and achieved so much whilst I am not able – for whatever reason – to stretch myself knittingwise.

So I decided to get started with a new and cool project soon, there is no point now just before moving and in the meantime to knit at least a little something for a friend who has patiently been waiting for a promised birthday gift since…. well, a while.

I came across a pattern for a tissue cozy (I guess a mobile phone would fit too) and made one using some left over pink Rowan Purelife Revive that I had used for a dress for my friend’s daughter and some green Stylecraft Cotton Classique.

I added a bow because the little girl is always wearing cute hair clips. Well until she looses them.  I am so pleased to finally have used my knitting needles again, I even took the time to put it on ravelry.

Warning: This post contains the description of unspeakable things, female body parts misused for baby feeding and there is even a picture of a BREAST. Naked. Really.

The holidays are finally coming to an end. We have done lots but nothing spectacular (unless you call a daily visit to the same playground spectacular). As we didn’t travel anywhere, we frequently pretended to be tourists and had lots of unhealthy food or healthy food in the pretend cafe at our dining table. (Can’t recommend this place, ridiculous prices, a single breadstick for £1!) We had stomach bugs, teething, eye tests, two visits to the fun fair and one immunisation which lead to multiple running away threats (a day later even). He would have taken his sister and initially the baby brother. But as this one needs to be breastfed he would have left him behind with the horrible mother that drags her children to nurses with needles. Which leads to today’s topic: the baby hat in the shape of a female breast or as others would call it: the booby beanie.

A dear friend of mine and midwife wants to learn knitting to be able to knit a booby beanie. As she wanted to present one in about a weeks time, I offered to knit one for her and let her learn knitting without the stress of a deadline.

I followed this pattern, written by Amanda Rundquist (she seems to focus on food now and I will definitely check out the website. That burger looks rather yummy, even at 8.30 in the morning (well, it is almost lunch time for me, I am up since a few hours).

I used some Rowan handknit cotton from my stash.  I chose the yarn because it was the one that came closest to my own skin colour, but it looks a bit unhealthy, not enough red in it. However, I think it will be presented to a bunch of Japanese midwifes, so it might not be totally wrong, maybe a bit too pale.

I did see a few hats online that were white or light pink with a bright pink nipple. I guess these colours make the hat look cuter but I personally think if I choose to put a breast on the head of my baby than it is a statement. Tongue-in-cheek pro breastfeeding in public. So I think the more natural and realistic the better.

I altered the pattern slightly as I was comparing with my own reality. So the colour change is two rows later but I didn’t decrease down to 5 stitches for the I-cord and did a few rounds with 8 stitches instead to form the nipple. 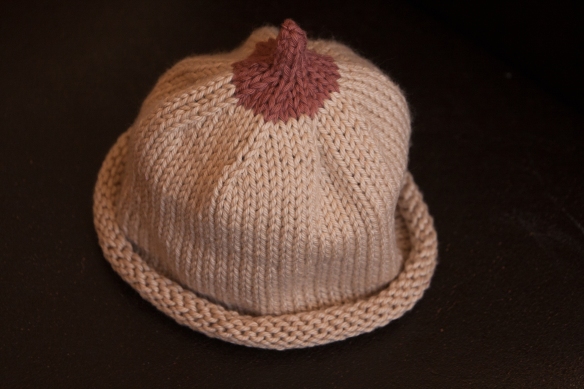 And if you stare hard enough, you can actually see my skin! Really. I tried hard to cover my breast with that baby but I failed. Luckily this was in the privacy of my home and not in a public space 😉

I am busy, really busy, a couple of things are in the making. Or finished. But there is no time to post. We seem to have decided on sleepless days for young man and sleepless nights for mummy recently.

So for today, just a couple of pictures about the yarn bombing project. Which is meant to be a stash busting project and therefore perfect for Scrap Sunday. Except for me, who had to buy acrylic yarn for this purpose.

work in progress, playing around with techniques to get a bigger variety for the tree

work in progress, made by assistant, picture taken by assistant too… I keep finding these interesting pictures of all sorts of things on my phone. Toys, furniture, siblings, selfies of the culprit, … and progress of knitting. I wonder where she gets that idea from. 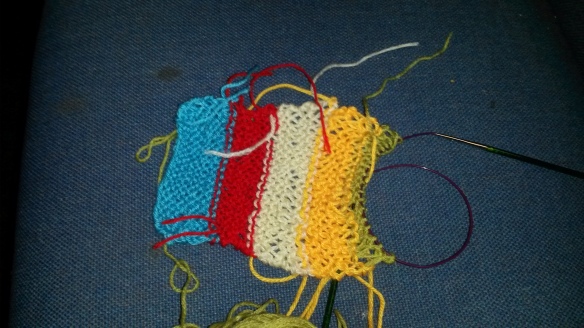 a pile of “tree-clothes” made during the workshop 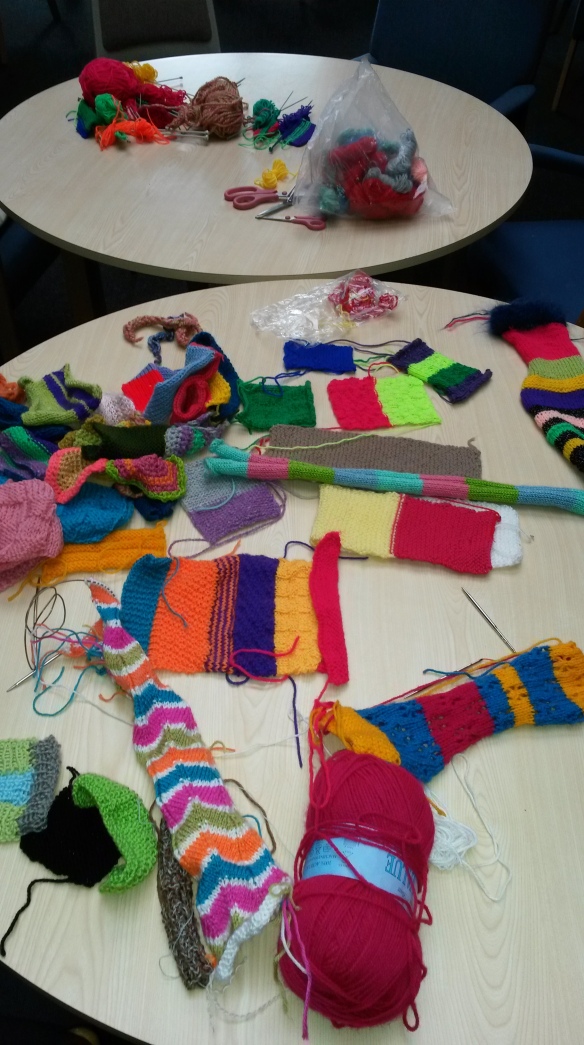 still one more week to knit and then it goes up. With a party in two weeks time.